What the actual fuck is all this about? 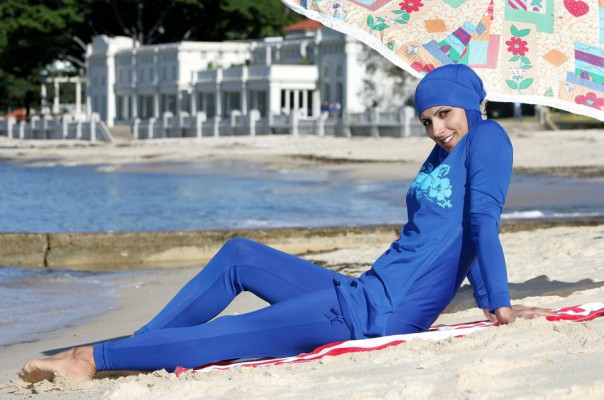 That’s what the French Riviera wants to know. So much so that they don’t want it on their beaches. That, friends, is what they are dubbing a “burkini”. This is a way for Muslim women to enjoy the beach while adhering to the Koranic dictate for women’s modesty .

Now when I read the Koran, I never ran into anything in it that demanded that woman cover herself the way that so many Muslim women do. It’s rather unspecific; the term is “modest”. I think we’ve all seen how far that’s been taken. And I really don’t think Muhammad intended for women to suffer discomfort or shame because of the weather. I’ve been to the big sandbox-it’s like being under a broiler. Then again, who knows because Muhammad was insane, believing he had talked to God.

The French beaches are wrong to discriminate against burkini wearers. As fucking stupid as it is to wear one, there is nothing inherently wrong with it. There’s no talking anyone out of their absurd religious beliefs. If a woman wants to roast in a full body wetsuit, let ’em have at it. Forbidding them from public space is only going to make their communities more isolated. You’re not teaching them anything-perhaps you think you are engineering liberation, but really you are fostering intolerance and discrimination. Leave them alone. It’s probably tough enough as it is to be a Muslim woman living in a doctrinaire household, where your husband can slap you around with God’s blessing.

We are cursed with the scourge of religion everywhere we look in this world. Yet in America, we are entreatied by our highest laws to respect it. As a nonbeliever here, I have to walk a fine line, wishing for its dissolution while acknowledging its importance to people. The French, who are more secular than we are, should be more practical about assimilating its Muslim community. It goes against all my fibers to rule in favor of respecting strict Islamic women’s dress codes, but it can’t be stopped just by covering women even more.