Representations And What They Aren’t

As a retired shut-in, I live primarily through Facebook. I get all of my news through its feed and I don’t have to go anywhere else to find out what is going on. I’m following enough stuff to piece together the days happenings-at least I think so. All my friends and family are there too, recording their lives for me, and telling me how they feel through photos, videos, memes, and likes.

Occasionally it bugs me, how plugged in I am. I’ve quit for months at a time and done amazing and bizarre things. But I think I can tell that I’m fairly normal. Facebook owns our collective ass and it’s getting harder to get by without it-in some places, like the disappointing Huffington Post, you may not comment without an account. I’m waiting for a post-Facebook world but I see it only becoming more entangling.

I just want to get that out there because I used to get my news from those links on the right of this post. I want you to go get your news there too. But I follow them on Facebook instead. This is kind of jerked off, because I am depriving them of clicks, which is what every blogger craves and covets. I should change that. Fuck, this confessional is a post on its own. 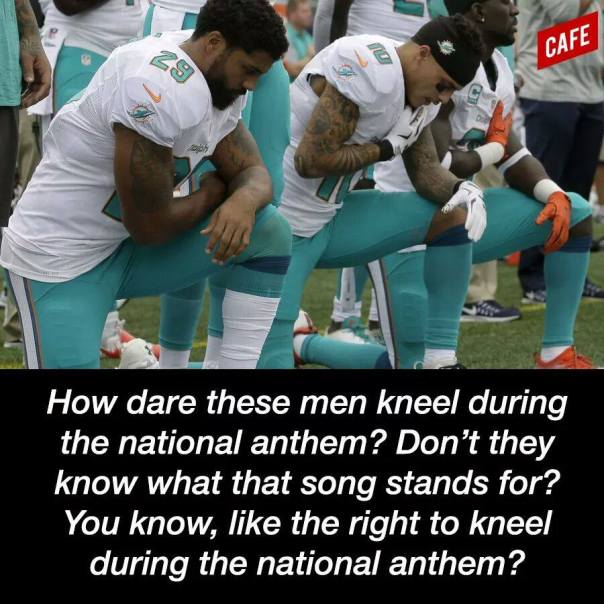 Listen to the pledge in your head.

Say anything about rights? Any clues as to its meaning?

Of course the fuck not. That’s because it’s nothing but a battle hymn with a soaring cadence that has become highly effective at pulling emotional heartstrings when sung by talented performers at public events.

What really bugs people about this whole not standing for the anthem is because it’s a stand-in for that other patriotic prop:the flag. Not paying your respects to the anthem is disrespecting the star spangled banner. As we know, that drives some people fucking crazy. One popular and virulent strain of thought is that brave people died for that flag to secure our rights. So, by yet another extension, you are disrespecting the troops. This, of course, is nonsense. Not even the revolutionary war soldiers died for them. It’s obvious to any novice scholar that American wars are wars of conquest, not defense. Our “liberties” have never been guarded by a single soldier marching under that flag.

But, regardless of facts, perception confers meaning to these exhortations and symbols. So we gotta live with this bullshit reasoning. I’m of course on the side of those who take a knee, I’m just not jazzed about the way we frame the act. But perhaps that’s the only way to get the right kind of attention. Time will tell. Today, a black man was assassinated by police with his hands over his head. The kneelers, like it or not, are onto something.

Posted on September 20, 2016, in Uncategorized and tagged Blind Patriotism, History Makes Me Sad, Uncategorized. Bookmark the permalink. Leave a comment.